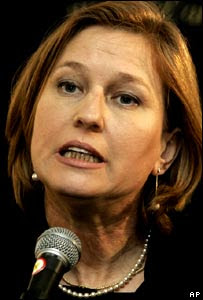 Tzipi Livni is an extremely popular politician in Israel. With Prime Minister Ehud Olmert under increasing pressure to resign, the current foreign minister's chances of leading the country are growing.

Ms Livni has been a firm and loyal friend to Ariel Sharon.The 48-year-old is currently Mr Olmert's deputy and could take over if Mr Olmert were to leave office.
A former protege of Ariel Sharon, Ms Livni has had a relatively short parliamentary career. She was elected to the Knesset in 1999 for the Likud party, after a practising as a lawyer. Before that, she had a short-lived career in a classified post with Israel's intelligence agency Mossad.
Since entering the Knesset she has filled a number of ministerial positions. In 2001, Ariel Sharon named her minister for regional development. Other portfolios include: immigrant absorption, housing and construction, justice and foreign affairs.
Only one other woman has ever held the foreign affairs portfolio - Golda Meir, who went on to become prime minister.
Within the Likud party, Ms Livni was seen as a rising star. Outside, her popularity was growing with ordinary Israelis.
"She is perceived as non-corrupt, as Mrs Clean amid a crisis of low moral standards within Israeli politics," says Ari Shavit, columnist with Haaretz newspaper.
"She is seen as an elegant, female politician among brutal, unworthy politicians."

Nationalist family
Her popularity also increased after she underwent what some commentators describe as an "ideological conversion".

Ms Livni helped broker Israel's withdrawal from the Gaza stripMs Livni hails from a prominent nationalist family - her father was a key figure in the Jewish underground movement, the Irgun, which fought British rule in Palestine before Israel was founded in 1948.
Eitan Livni, a Polish-born member of Likud, served three terms as a member of the Knesset.
His daughter now champions a vision of Israel co-existing with a Palestinian state.
In 2006, she told the New York Times: "I believe, like my parents, in the right of the Jewish people to the entire land of Israel. But I was also raised to preserve Israel as a homeland for the Jewish people and [to preserve] democratic values.
"So choosing between my dreams, and my need to live in democracy, I prefer to give up some of the land."

In the centre
"The Israeli media love right-wingers who convert - the born-again moderates," Mr Shavit told the BBC News website.
She's never really had to fight for anything or take a difficult decision, and she's never really seen the rough side of politics
Ari Shavit, HaaretzAnd, with the majority of Israelis in the centre politically, he says, Ms Livni is viewed as the only centrist who is not tainted by corruption.
In terms of the Palestinian issue, commentators say that she gives the impression of being reasonable and open to talks.
She has put a great deal of emphasis in public statements on being in favour of negotiations but maintains that the Palestinians must abide by conditions set down by the "Quartet".
The Quartet - which includes the United Nations, the United States, Russia and the European Union, required the Palestinian government to fulfil three conditions: renounce terrorism, recognise Israel, and recognise previous agreements including the Road Map.
Throughout her parliamentary career, Ms Livni remained a firm and loyal friend to Mr Sharon. She became a close adviser to the former prime minister and in 2005, helped broker Israel's controversial pullout from the Gaza strip.
Her loyality to Mr Sharon during his political struggle over the disengagement brought her to the top politically.
When the former prime minister left the Likud party to set up Kadima in the autumn of 2005, Ms Livni went with him.
Critics argue that she lacks military and political experience to lead the country.
"A lot has been given to her politically by Mr Sharon," says Mr Shavit. "She's never really had to fight for anything or take a difficult decision, and she's never really seen the rough side of politics."
He says that the war with Lebanon last year had a strong impact in emphasising military experience.
"A year ago, there was a trend for civilian leaders," he says. "But now, if Ms Livni was a candidate in an election, her lack of military experience would be a drawback. She would have to find an experienced military partner."
Ms Livni has always kept a low profile with the media, she doesn't like speaking to journalists and when she does, questions about her family are off limits.
What is known about her family life is that the Livnis have two sons - a 19-year-old who is doing his military service, and a 17-year-old who is at school.
Ms Livni was born and raised in Tel Aviv. She graduated from law school at Bar-Ilan University, which was attended by many of the country's security hawks.
from guardian.co uk site
A western diplomat who has worked with Livni trying to revive the Israeli-Palestinian peace process laughs at media portraits of her as a dove. "She is no softie," he says. "On key issues for Israelis - security and opposition to an unfettered right of return for Palestinians into homes lost in 1948 or 1967 - she is as tough as anyone."
Aqilah Suhaimi:
she is bla..bla..bla..but at least she has sympathy towards other people(hahaha..)
p/s:gila la dia ni..tough!
Posted by 'Aqilah at 5:37 AM